The 1960s were the years of revolution and exuberance not only from the standpoint of world history but also in watchmaking. In 1964 Rolex released the heaviest gold watch carved out from a single block designed in white or yellow gold, sapphire crystal, and a double deployment bracelet. The watch was named King Midas Rolex after an ancient Greek king who had a mystic touch that could turn anything into solid gold. 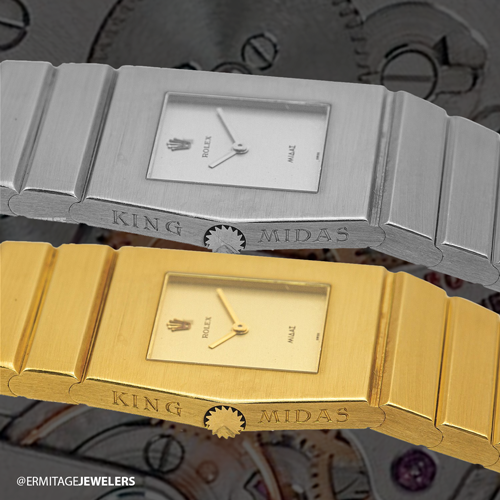 Creator Gerald Genta drew inspiration for King Midas Rolex from the geometric designs of ancient Greece. The case design is based on the famous Parthenon Temple in Athens. Genta's work has been referred to as "the Faberge of watches" and King Midas Rolex is undoubtedly one of his masterpieces. 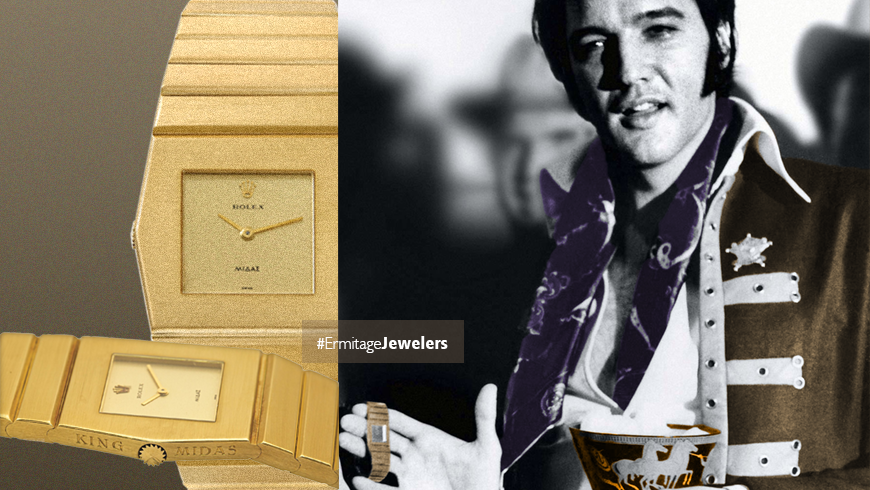 The opulence and rarity of the timepiece with its extremely low profile was designed specifically to appeal to the extravagant few. King Midas Rolex graced some of the most well-known wrists in American history. Among the lucky few to own a King Midas Rolex was a popular singer Elvis Presley. Elvis's King Midas Rolex is now on display at Graceland where one can see that the watch was well worn and enjoyed by the father of Rock ‘n Roll. 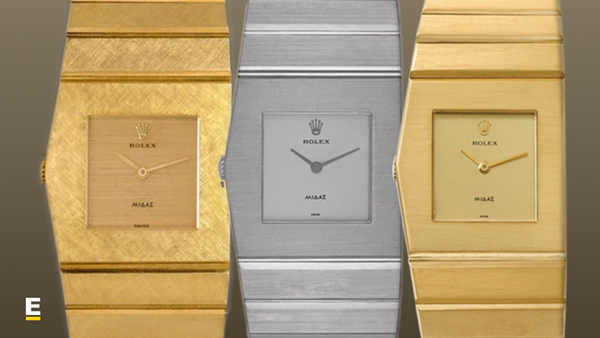 King Midas reference number 9630 first came in a limited edition of 1000. Throughout the history of Rolex, there were only three limited editions with King Midas being one of them. The watch, weighing between 150 and 200 grams, is sculpted from a single block of 18 karats yellow or white gold. The production of this limited edition model also marks the first use of sapphire crystal. 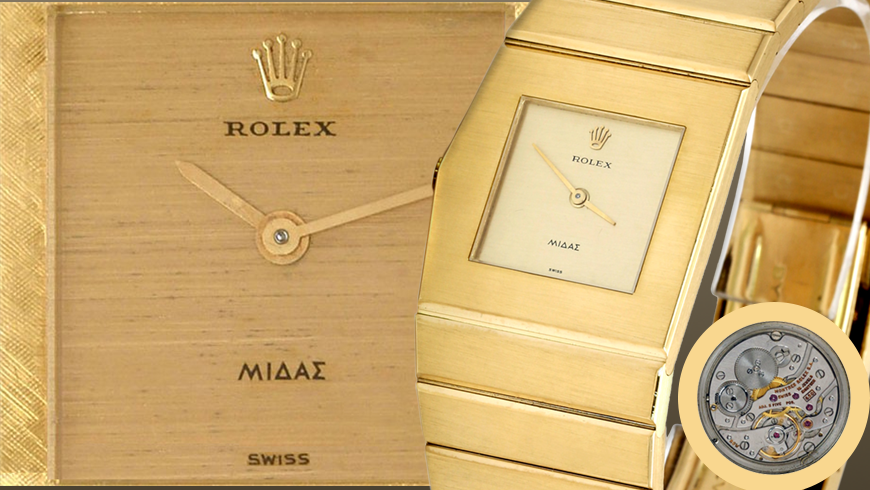 King Midas comes in yellow or white gold with some models designed with diamonds and specialty dials. What makes this watch even more appealing to a collector is that the King Midas Rolex was produced for a person who is left-handed and is worn on the right wrist as a nod to the legend of Midas whose left hand had the golden touch. 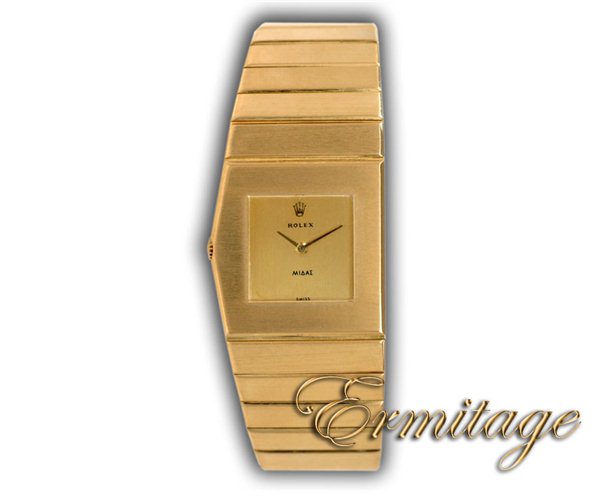 The King of all watches deserved a royal presentation and the box it came in was equally as sophisticated as the watch.  It is speculated that the box for this limited edition Rolex was made in France to reflect Genta's vision without the knowledge of Rolex. Each King Midas Rolex produced was shipped in a gold and white box with Grecian figures gracing the top of the lid. The inner box is shaped like a traditional Greek urn in black and orange in order to showcase the luxurious glimmer of the King Midas  Rolex watch.

The highly regarded Rolex King Midas is designated as model 9630 as can be confused with the Cellini model King Midas watches. The Cellini King Midas Rolex was not a limited edition release and thus is not considered to be a significant part of Rolex History. Below is the detailed description of the King Midas 9630 Rolex Watch:

This Rolex is manual winding and features hours and minutes. Rolex 650  movement that is used in this watch, has a total height of 1.8 mm x 20.8 mm diameter, featuring 17 jewels. Introduced in 1958 the movement and was not produced by Rolex but was used in the Rolex watch, King Midas. The manufacturer of the 650 movement was Rayville Blancpain and carried the model number caliber 58. The 650 movement was replaced in later model watches with the 651 an 18 jewel movement.

At the thickest part of the watch, King Midas Rolex measures 4.35 mm. Without the watch, movement cover installed, the watch case measures at 3.6 mm. The watch case features the words "King" deeply etched in the gold on the left od the sun shaped crown and the words "Midas" etched to the right. The watch case tapers from the edge of the case near the area where the band is attached on each side.  The case tapers towards the center equally where each side meets the crown and measures 27.8 mm at the widest part of the watch. The watch case length measures 26 mm. The watch dial is square and measures 16.5 mm x 16.5 mm, matching the exact dimensions of the sapphire crystal which crystal sits flush to the watches overall thickness creating a smooth surface as well as retaining the thin sleek styling of this timepiece. 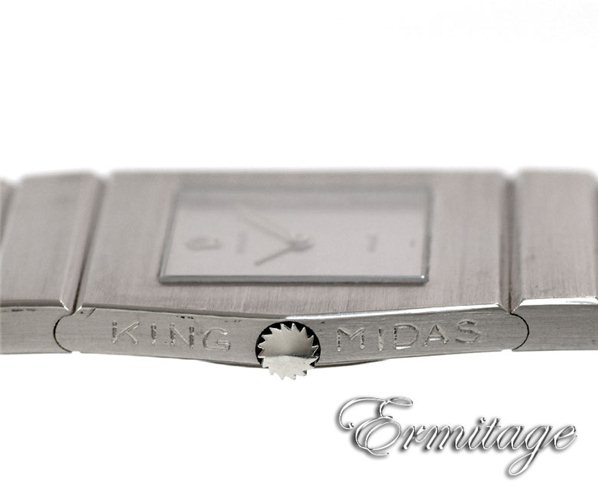 The watch dial is square with a champagne matte finish. The watch hands are yellow gold baton. The Writing on the face of the dial features the iconic Rolex "Crown" figure and the word "Rolex" at the 12 o'clock position. The word "Midas" with a traditional Greek triangle "A" is written near the 6 o'clock position followed by the word “Swiss” near the center of the dial at the bottom. There are no numbers or markers for the hours or minutes on the dial of the King Midas Rolex. 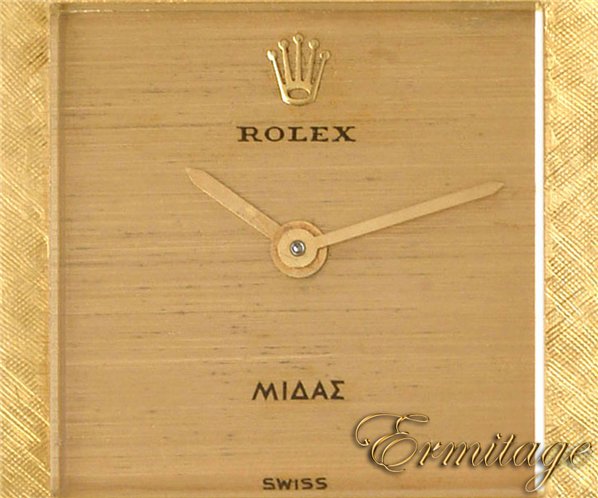 The watch crown measures 3.85 mm in diameter and does not have the famous Rolex Kings Crown on it, they were manufactured blank for the King Midas. 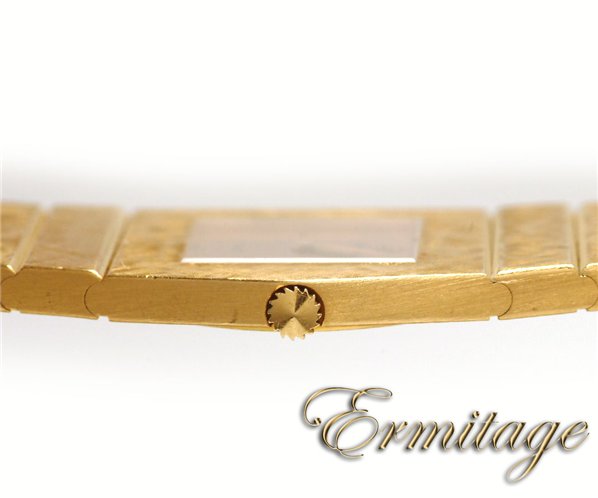 The Watchband of Rolex King Midas 9630:

The watch band tapers away from the watch case towards where it connects to the double deployment bracelet on each end and the watch width at these points of contact is 15 mm. Wrist size maximum 190.5 mm reduces incrementally smaller to accommodate a smaller wrist of down to 171.45 mm. The watch band thickness is 3.8 mm for all links on both sides of the watch. 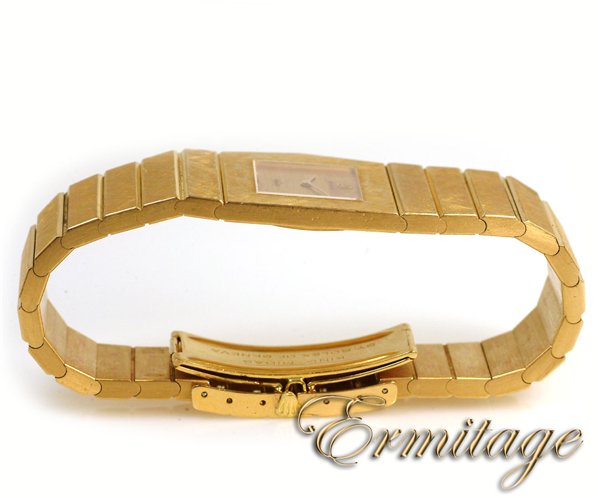 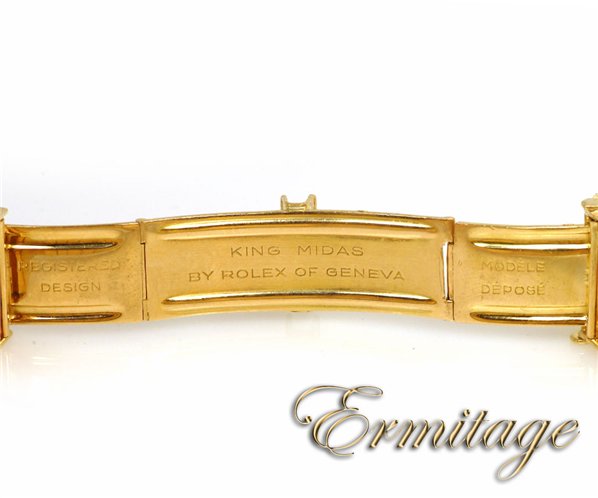 This decadent, limited edition, 1964 King Midas Rolex 9630 will be the start of any watch collection. The vintage look and the heavy feel of solid gold is bound to attract attention and contribute extravagance to any ensemble.

Here at Ermitage Jewelry, we deal only in the highest quality Rolex watches and would love to acquire a King Midas Rolex for our collection.