Pasha of Morocco lived a life of decadence and frequently traveled to Paris where Cartier was headquartered. During one of his visits, El Haj T'hami el Mezouari el Glaoui, Pacha of Marrakech commissioned a waterproof watch from the watchmakers of Cartier. It is unclear whether Louis Cartier was one of Pasha’s close acquaintances or not, but it is not a farfetched assumption considering Pasha’s interest in European fashion and extravagant taste. Although there may be a considerable amount of speculation on the design origination, one fact remains indisputable: Cartier Pasha is one of the most popular Cartier lines today.

The line was officially introduced in 1943 and boasted a fair amount of success. After a while, the popularity of the watch began to decline, largely due to the increasing demand for military watches during World War II, until Cartier halted production of this line completely.

After the merger of all three Cartier houses in 1985, the Pasha line was resurrected. The watch became synonymous with power and elegance which resonated with the ideal woman of the 80’s. The unique, round design, blued-steel, sword hands, and a “canteen crown” of this Cartier time piece went well with a “power suit” as well as an evening gown.

Currently Cartier carries a number of Pasha styles and sizes. Some of the most popular ladies’ Pasha models include: 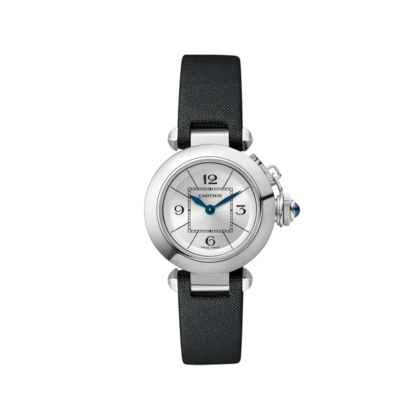 This is a reinterpretation of a larger, men’s watch into a smaller, daintier design. Miss Pasha has a 27 mm case which  has a water resistance rating to 100 feet, Cartier caliber 157 movement,  blued, synthetic spinel cabochon, sapphire crystal, diamond-shaped, blued-steel hands, and is available in a variety of dial colors. 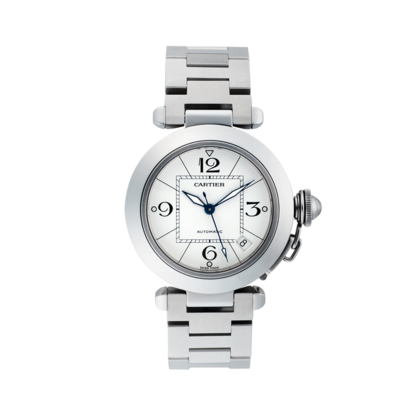 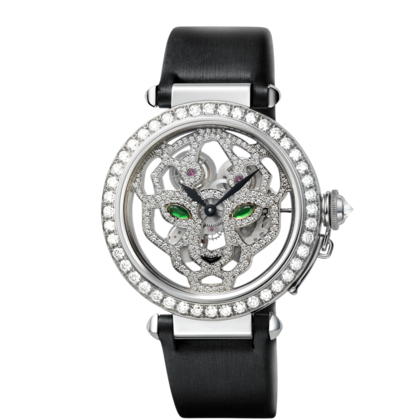 Pasha de Cartier is one of the most beautiful functional jewelry pieces as well as an instrument of precise time keeping. This model of Pasha watches takes expert watch craftsmanship and elevates it to the next level though carefully disguised skeleton movement, addition of precious stones, and breath taking airiness of the dial. In a way this watch is a depiction of the complexity of femininity.

Over the years, there were many iterations of the watch, but the design hasn’t changed much. Cartier kept the familiar lines of the Pasha and modified the movement and the dial design. Although this men’s watch was popular with the women of the 1980’s, the current men’s line is the definition of sophisticated masculinity. Current men’s Pasha de Cartier models include: 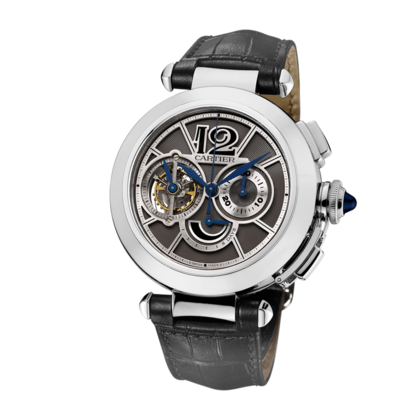 This model of Cartier Pasha has a manual, caliber 943mc movement which combines chronograph and tourbillon complications in a neat, elegant, and refined package. This expertly crafted watch is a fine example of Cartier’s ability to combine fine jewelry with an essential time keeping tool. 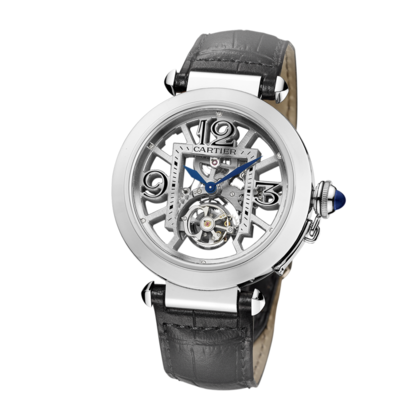 Cartier is undoubtable the master of the invisible movement.  This Skeleton Pasha represents this jeweler’s ability to create a functional work of art. The watch has a carefully hidden caliber 9457MC movement that is cleverly disguised as a dial. This creates an “airy”, uncluttered feel of this incredibly precise timepiece.

It can be said that this Pasha is a true classic. The round case of this watch houses an unstoppable and incredibly precise movement that was designed in the best Geneva watchmaking tradition. The dial of the watch features four Arabic numerals and index markers and the crown is reminiscent of the original 1943 model.